Our dominant hen went broody this spring and we obtained fertile eggs for her to hatch. One of those eggs became Pat. We attempted feather sexing and it was completely ambiguous so he got an androgynous name. One of our more accurate divinations as we now have a lovely pullet named Boris and gave away her sibling a cockerel named Natasha.

Of our male chicks Pat was the slowest to let on he was male. We believe he was a cross between New Hampshire Red and Easter Egger. He had a small Easter Egger rose comb and fluffy Easter Egger cheeks and beard with scarcely any sign of wattles peeking through. He eventually developed great plumage with deep red wings, fiery orange saddle and hackle feathers and an iridescent green tail which fully gave him away. But prior to that the only thing suggesting maleness was size. He was the biggest, fastest growing of our chicks. But unlike the other male chicks who grew tall and athletic, Pat was plump and awkward. It wasn’t until he was our last remaining cockerel that he began to blossom as a rooster.

Although he was the last to crow it became a powerful full throated blast and we took to keeping him indoors over night to spare our neighbors his early morning performance. In spite of being big he was low in the pecking order. He didn’t get picked on much because he would hang back out of intimidation. Eventually he became so much bigger than the rest of our flock that his confidence grew. He started doing awkward cute dances to woo our pullets. He would turn himself sideways in front of them and puff himself up and stretch his wings down and out and stomp up and down. And when that failed to impress he would stomp round them in circles. When that failed he took to snatching the choicest food from the bowl taking it a few feet away then clucking about his prize and offering it back to the girls as they came to investigate.

His confidence grew to where he wanted to mate with our older hens. But in spite of being much bigger than them he was still very much afraid of them. Which led him to become the worst chicken ever. There were no attempts at seduction with clumsy dance or snatched treats. Instead he would sneak up and pounce. He might be on and off in a second but his hurried rough technique of biting on to a clump of feathers on the backs of their necks and grabbing onto their wings with his giant feet caused the hens distress and often cost some feathers. The hens quit bullying him and instead would run in terror. And he started chasing.

I hoped this would be a short passing phase. I tried prevention and correction of his assaults with blasts from the garden hose. When he went after our molting Barred Rock hen her distress was so apparent our dog would rush in to her defense and drive Pat off. In recent rains I noticed how thin the feathers had become on his favorite target our lowest ranking hen a previously sweet and gentle Australorp and I began keeping him separated from her. 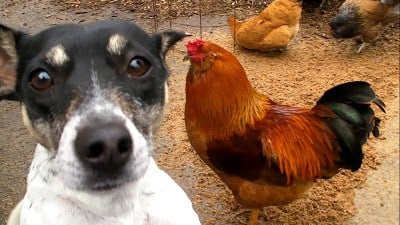 And there was the incident. We heard a commotion outside amongst the chickens. Our dog was inside with us so I knew she wasn’t involved and took my time to go out and investigate. I found our molting Barred Rock hen dead in a corner formed by stacked cinder blocks next to the back wall of our house. Her head and apparently broken neck wedged in between the blocks and the wall. We don’t know what happened but I suspect Pat chased her and she died trying to get away from him. We contemplated eating her but not being certain of the circumstances of her demise we chose not to.

I was fond of Pat. He was becoming braver and more protective of the girls. He was a good sentry for hawks and other dangers while they ate. I had seen him flush out mice and alert my dog to rats. He was sweet with me and our pullets but with our hens he was awful. Perhaps not truly the worst chicken ever but bad enough that it was time for what we had long resolved to do with a problem chicken.

Which lead to Pat becoming the best chicken ever. My wife arranged for a family dinner at her mother’s house last night. We brought him over ready to roast. We thought due to his size and age that the meat might be tough so Sara chose to slow roast at 250F. It took longer than we calculated before we turned the oven up for a final browning and then sat down to dinner 90 minutes late with everyone very hungry. Which perhaps contributed to the appreciation.

My wife and I only rarely eat meat. Prior to baking I was slightly nauseated by the clean fresh meat which to me had an odor of death in contrast to the exuberance of life in the pictures of his flashy plumage I displayed on my phone. But out of the oven came the best chicken ever. Our home produced eggs are much better than any eggs we have purchased but are clearly still eggs. This meat was so much better I found myself questioning is this really chicken?

We go for months at a time without eating meat. Mainly because we are no longer willing to buy meat that we believe may have been raised inhumanely or by practices environmentally damaging and not at all sustainable. I’m not desiring now to raise poultry for slaughter due to the work and drama of the process. But I’m feeling more strongly that the best meat one can eat is the meat one produces themselves with all of the respect, work and appreciation for everything involved in the process. I’m not about to speak out for a campaign to change the city’s ordinance prohibiting the raising of animals intended for slaughter. But I am questioning the wisdom of it thinking that prohibiting the sale instead of prohibiting the raising would be better. But very thankful we otherwise have such enlightened ordinances regarding the raising of poultry for eggs.