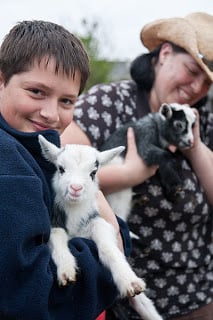 The only thing I regret about moving to the country is how many people look at me and say, “I wish I could do what you’re doing, but I live in town.” Oh, but you can do what we’re doing, even if you live in town! I interviewed a few people for H&H who are doing it, and today I’m posting an interview with another person who lives in town and is doing it!

Rachel Hoff, along with husband Tom, and son Paul, 14, live in Vallejo, CA, a city of 120,000, and decided last year to start eating locally and growing as much of their own food as possible. Their city lot is only about a quarter acre, which is about the size of most suburban lots.

They have 19 chickens that provide eggs, and they are currently raising several animals for meat, including seven chickens, three turkeys and nine rabbits. Recently they butchered two male goats that were the offspring of their milk goats. They also have bees for honey.

After learning about Rachel and her family, I just had to contact her so I could share her family’s story. Here are a few questions that I asked her:

Why did you decide to embark upon a homegrown — or locally grown — diet?

Rachel: Several years ago I developed an intolerance to soy and then canola soon followed. We had already started eliminating processed foods but we really hadn’t taken the dive. Then we bought our home because we loved to garden and it had a very large lot for our area. We wanted to produce most of our food but had never really pushed ourselves to do it. Then we watched No Impact Man, which is a documentary about a family in New York City who live in an apartment and went a year without creating any trash, driving any vehicles or using any electricity. We realized that if someone could do that while living in a small apartment we could do something as well. We learned about our food system and decided that we wanted to make sure we knew exactly where all of our food came from. To do so, we would have to buy directly from farmers and grow and raise our own.

What was the biggest challenge?

Rachel: Planning meals was difficult because everything was seasonal. Cookbooks nowadays are based off of the fact that all the ingredients are available all year long so we couldn’t use them in our meal planning. Not being able to just get up and have a snack was tough too because if you wanted something to snack on, you were going to have to make it. And forget about cravings. If it wasn’t here there wasn’t anything you could do about it.

What did you like the most about the past year?

Rachel: We know exactly where our food comes from, what’s been put (or not put) on it, what it’s been grown in. I love being able to grab food right out of the garden, bring it in and eat it right away. Most importantly it’s brought us closer together. We’ve become a team and have learned how to work together really well.

Rachel: It was surprising to find out that once we had sourced everything how easy it actually was. Friends and family always say they could never do it, but really it’s not that hard. It takes a little extra time to cook but we no longer spent all that time in the supermarket. We went to the farmers’ market once a week and placed an order for our staples once a month. It also made shopping for food fun. It wasn’t a chore anymore.

You were originally going to do this for only one year. Why did you decide to continue?

Rachel: The reasons we started doing this haven’t changed and we’ve saved money while buying higher quality local food that’s been raised and grown sustainably. I love meeting and supporting the farmers that grow our food. They are hardworking people that deserve a lot more respect than our society pays them. The food also tastes better maybe because of all the blood, sweat and tears that go into making it.

If you’d like to know more about Rachel and her family, you can visit her blog, A Year Without Groceries, and her website, Dog Island Farm. You can also ask questions in the comment section below, and she’ll pop in on Monday to respond!