My oldest daughter, who now lives in a city, decided she wants backyard chickens, and we were happy to help out. After looking at a variety of portable, bottomless chicken coops online, we designed and built this one for her. 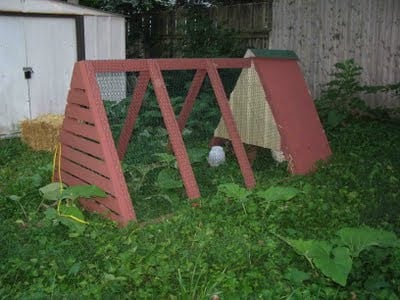 The base needed to be four feet by eight feet so it could fit into the bed of our pick-up to move it to her house after we made it at our place. (The hens were transported in that dog crate.) 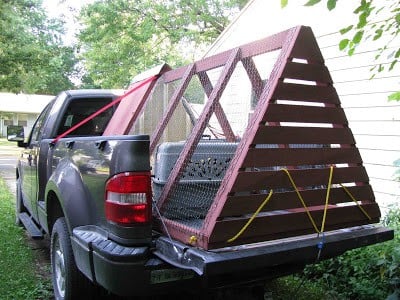 The base is made with 2X4s and is four feet wide by eight feet long. 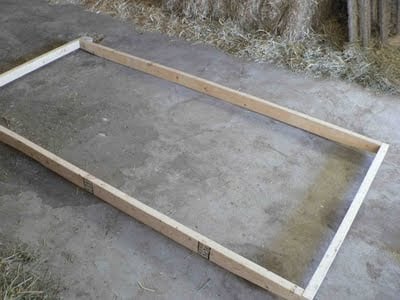 It was helpful to have two people working on it together. 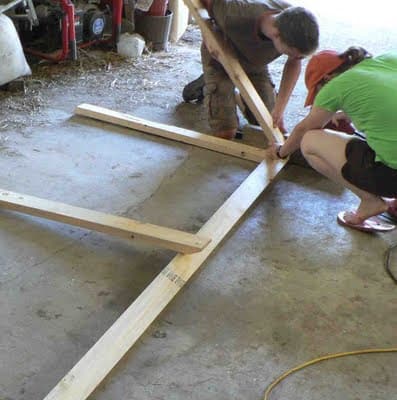 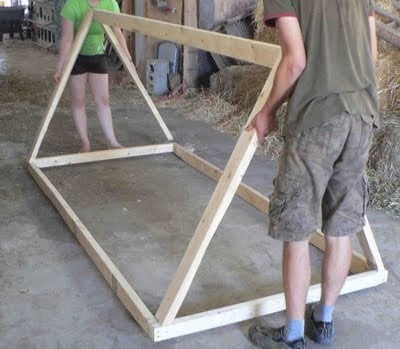 There were ten, four-foot long pieces that connected the base to the top of the A-frame, creating four two-foot sections. The 2X4s are two feet apart because the three front sections will be covered with chicken wire, which is two feet wide. A roll of chicken wire is 25 feet long, and we needed 24 feet to cover the run. The coop area contains two nest boxes that are each one square foot. 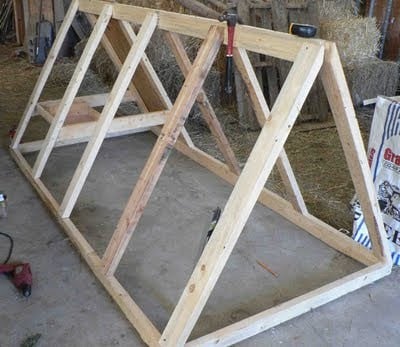 The nest box is removable to make it easier to clean. 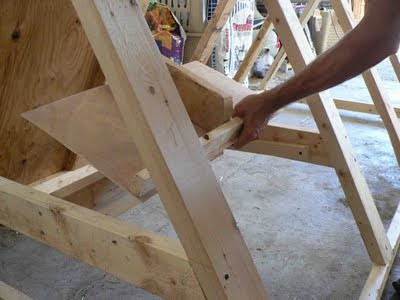 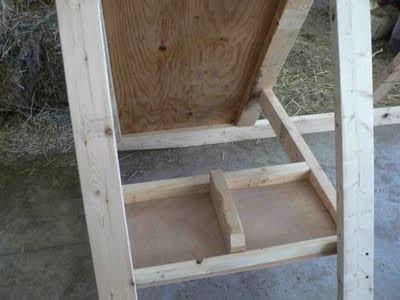 The coop section is a two-foot section on one end, which we enclosed with a plywood wall on one side and a plywood door on the other side. The door is on the nest box side (right side in this photo), so you can feed and water the chickens, check for eggs, and clean out the nest box when necessary. 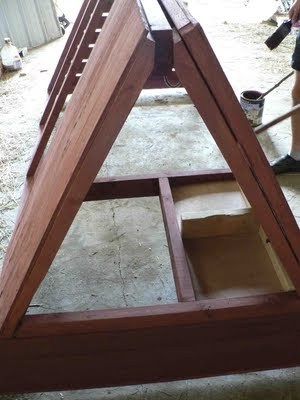 We painted all of the exposed wood with red barn paint, and we put a piece of metal over the top of the coop to keep rain from dripping down on the girls when they’re sitting on their roost. 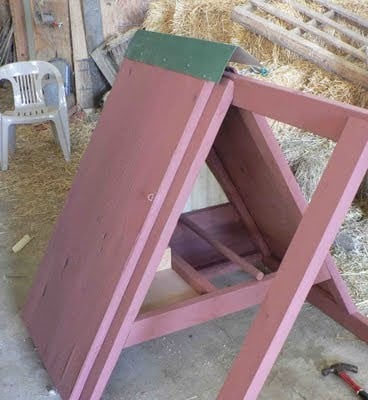 The ridge vent is high enough that the door can be opened and closed without it scraping the top of the coop. We put translucent plastic siding on the front and back to let light into the coop. The plastic is one foot off the ground between the coop and the run, so the hens can run in and out of their coop whenever they want. 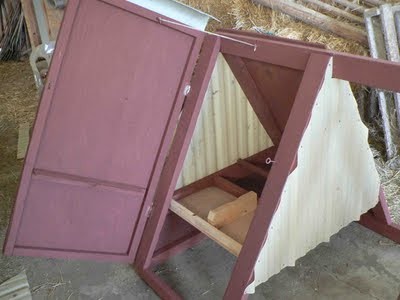 And here is the coop in my daughter’s yard before we put the hens in it. I wanted a bottomless pen so the chickens could be moved to fresh grass every couple days. It also eliminates the need for bedding or litter in the coop, and the lawn is automatically fertilized. The yellow rope on the front is attached to the base, so the coop can easily be moved by one person. There is also a rope on the other end, so the coop can be moved in either direction. 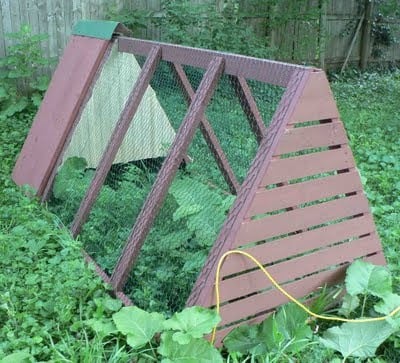 And here are the four occupants. Two are two-year-old New Hampshire hens, and the other two were hatched this spring — a white one with feathered feet (obviously a descendent of a brahma, a breed we had several years ago) and a barred rock. These lucky four were chosen because they refuse to leave our goat barn, so we had to literally hunt for eggs every day. No doubt in a couple months, an unfound, rotten one will explode, which is not pleasant for anyone with a nose. Four hens is the limit for this particular design because of the length of the roost in the coop. Throughout the coop and run, the hens have eight square feet each, which is more than 16 times the amount of space that factory farm layers have. (And the factory farm hens don’t have grass and sunshine.) 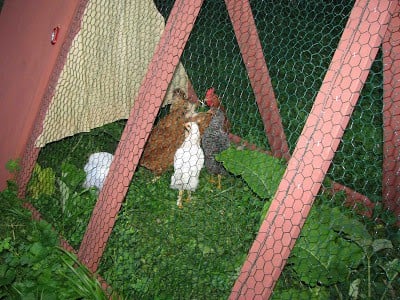 The feeder sits under the nest box, and the waterer sits in the run. There is a two-inch space between the nest box and the door, so Mike put a little shelf on the door to cover that crack so that chicken poop doesn’t fall into the feeder from the nest box. After this picture was taken, and before the hens were introduced to their new home, straw was put into the nest boxes. 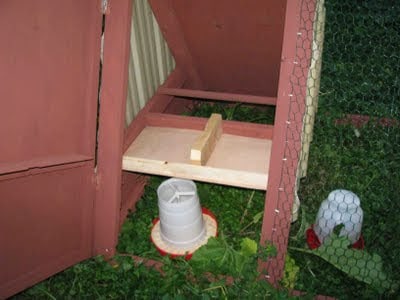 And here is a New Hampshire hen in the coop. They duck their head to walk in. 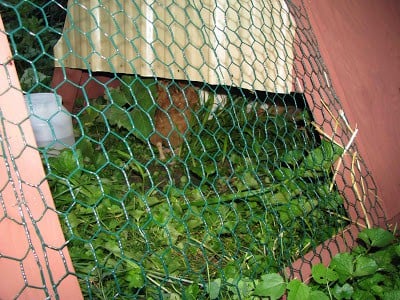 It was really exciting to work on this project for our daughter. I’ve been a big cheerleader for city chickens for years, and it was fun to actually create a movable pen and figure out how to make chickens work in our daughter’s yard. 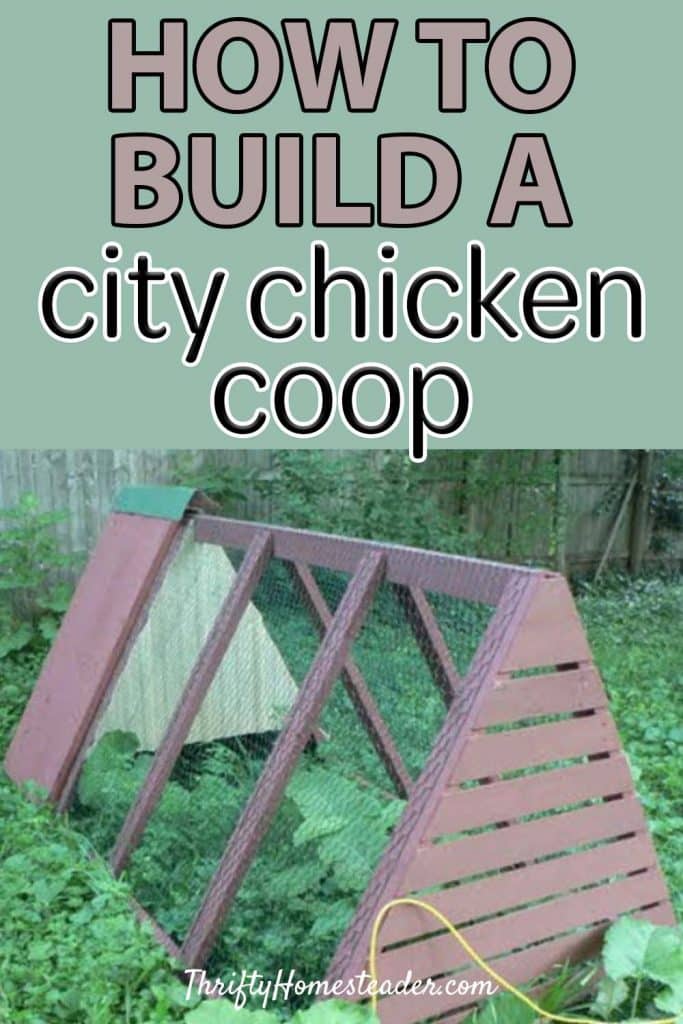