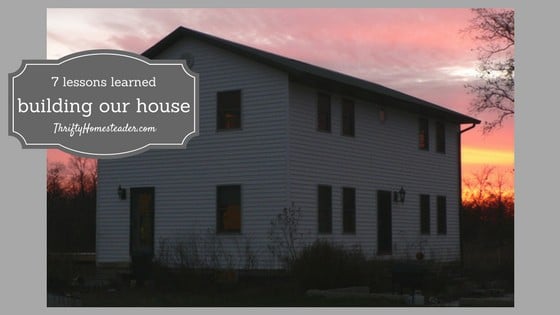 A lot of people dream about building their own house, but there are only a few of us brave enough — or crazy enough — to actually do it. I am not talking about hiring a contractor like city slickers and picking out your flooring choices. I’m talking about sawing boards and hammering nails. Homesteaders seem to be more prone to this malady than the rest of the world. We all have a desire to do things ourselves rather than hiring someone else to do them, and some of us take it to an extreme level. Of all the things we’ve done out here, I’d have to say that building our house was the most challenging. 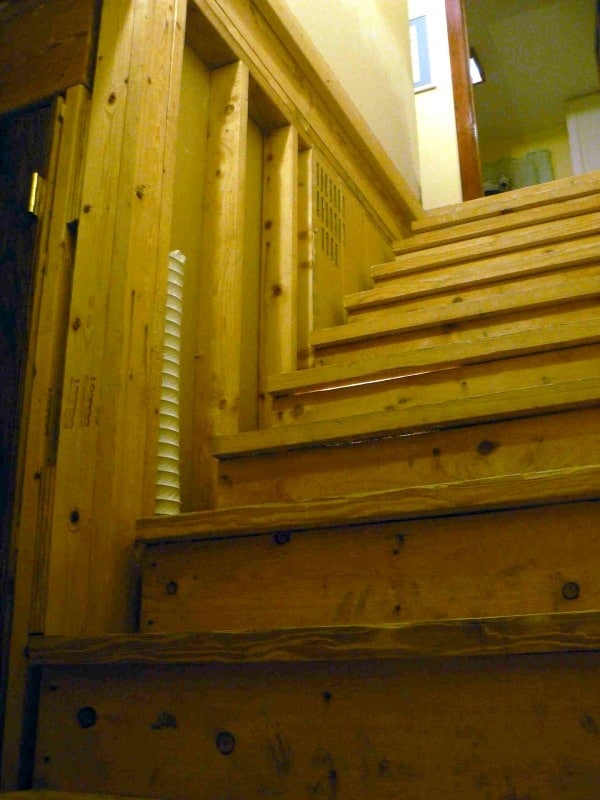 Nowhere are mistakes on the homestead as inevitable as when building a house, especially if it’s your first. We broke ground on our house in the spring of 2004, and it’s still unfinished. We’ve lived in it since December 31, 2004. Although it is in much better shape than it was in 2005, it is still obviously a work in progress. You see those stairs? That’s what they look like today, although that picture was taken in 2010. And no, those are not the basement stairs. Those are the stairs from the living room up to the second floor.

We’ve learned a lot in the last 13 years, so as always, I figured I’d share our lessons learned so that you don’t have to make the same mistakes we did.

Don’t move in until it’s done.

I am not saving the best for last. I’m putting this out there for you to read right off the bat, just in case you don’t finish the article. Let me say this again — Do NOT move into the house until every last thing is finished! We happened to know a couple of people who had built their own house, and this was their advice. They were absolutely adamant about this. One told me that her parents sold their house 11 years after they built it, and it still wasn’t finished. I found that really hard to believe. But here we are 13 years after breaking ground, and it’s still not done. What’s still not done? Baseboards, window frames, crown moulding, edges on built-in bookcases, some door frames, and those stairs!

Hire someone to do drywall.

Back when we built the house, I had a friend who worked in kitchen design, which meant she had experience in home construction. She told me to hire someone to do the drywall. She said that they were crazy fast. They’d be in and out in a single day, whereas it would take us weeks. I should have listened. She was right. The worst part is that I wound up with carpal tunnel so severe that I could not even use a pair of scissors, and I was afraid to lift anything breakable with my right hand because the muscles would give away unexpectedly. And to make myself feel like “bad mother of the year,” our youngest wound up with cracked and bleeding hands from exposure to the dust created by sanding the joints between the drywall. (Bonus lesson: Wear disposable gloves if you ignore this lesson.)

Crown moulding is NOT easier than taping and mudding drywall joints at the ceiling.

After taping and mudding what felt like a ton of drywall joints, I had this crazy idea that it would be quicker and easier to just put up crown moulding. Maybe that’s technically true. I don’t know because we still have open joints at the ceiling. Not one single piece of crown moulding has been put up. Procrastinating on the crown moulding is just way too easy. I never would have believed it, but I’ve learned to ignore the ugly, unfinished joints up there.

Build what you want first time around.

We chose this particular plan because it would work well for a family with three children, but without a first floor master bedroom, we knew it could become challenging as we got older. I didn’t expect “older” to cause problems when I was in my early 50s. After injuring my knee three years ago and my back two years ago, I realized just how challenging stairs can be. We had talked about adding on a first-floor master at some point in the future, but I really wish we had chosen a plan with a first floor master originally.

We questioned whether or not the kitchen would be big enough. My husband offered to extend the kitchen. I said no because I was worried about changing the footprint of the original plans. Now I really wish I’d have done that. If anyone ever asks you if you want a bigger kitchen, the correct answer is YES! I don’t care how big the kitchen is, a homesteader can always use a bigger kitchen. When you have three or four people in the kitchen canning tomatoes or preparing meals, you can always use more room.

My husband borrowed a trailer from someone so he could pick up building supplies with our mini-van. The tongue of the trailer was almost scraping the ground, and our little minivan was dying, trying to pull it. After that, we started having things delivered.

You don’t have to do everything yourself.

As homesteaders, we want to do everything ourselves. But it’s okay if we hire out a few things. In our case, it was obvious we needed to hire someone to do the basement. We didn’t have the equipment to do it. I also insisted that we hire someone to do the insulation. The only readily available DIY insulation back then was fiberglass, and since both of my husband’s parents had had cancer, I didn’t want him handling that and possibly inhaling fiberglass. The insulation we chose was blown-in, super-shredded newspaper with glue in it so that it wouldn’t sink like old-fashioned cellulose insulation. And the other thing we had done was pouring the lightweight concrete on the in-floor heating tubing. It was required by the warranty, and we didn’t have the equipment to do it anyway. As I said earlier, we should have had the drywall done, and as I look around, I think we should have had the finish carpentry done. I sometimes think about hiring a finish carpenter, but there are a million other things on my to-do list that seem more important.

So, if you are crazy enough or brave enough to build your own house, I wish you lots of luck! Sometimes I think I’d like to build another house so we could “do it right” the second time around. But then I realize that we do have a beautiful house that is almost finished, and it really won’t take that much work to finish it.

Planning any energy-efficient upgrades for your next home build, remodel, or improvement project? Check out – How To Create An Energy Efficient Home

Thrifty Homesteader is a participant in the Amazon Services LLC Associates Program, an affiliate advertising program designed to provide a means for sites to earn advertising fees by advertising and linking to amazon.com. You pay the same price when you purchase through affiliate links as you would if you went directly to Amazon, and our site earns a small commission, so by shopping through our links, you are helping to support our blog so that we can continue to provide you with free content.
36 shares
36 shares