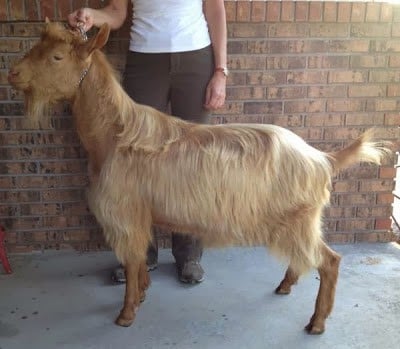 In that issue, the magazine described how breeders were establishing the Guernsey breed in the United States utilizing the British Goat Society’s grading-up program, by using purebred Golden Guernsey sires on Swiss-type dairy does to create the British Guernsey goat. I mentally filed the information away, since I owned Nubians and Nubian crosses were a definitely no-no in the breeding up scheme.

I continued to follow the progress of the breed in the United States, and in 2011, purchased my first Guernsey does. By this time, both does and bucks were starting to become available, but they were still few and far between. I drove to Pennsylvania for my does and to Washington for my buck. The does were bred and kidded in 2012. As beginner’s luck would have it, my first Guernsey kidded with quad does. I was off to a great start! My breeding goal with my small Guernsey herd is to raise productive animals that are structurally correct, keeping in mind that the animals being raised now are the foundation animals for this developing breed.

Guernsey goats have a friendly and affection temperament. Many people are attracted to their golden hair coats, which can be short or long and flowing, and range in color from pale cream to deep russet. They are known for their efficiency of production, and their productivity and smaller size make them ideal for a household or a less intensive production system.

While the challenge and satisfaction of working with a rare breed initially attracted me, I have come to appreciate the Guernseys for the qualities that make them unique and useful.

Teresa Casselman was raised on a central Illinois farm. She and her husband have operated Six Point Farm for more than 30 years. The family became involved in dairy goats in 1994 when a couple of registered Nubian does were purchased as a 4-H goat project. Now, nearly 20 years later, the boys are grown and have left the farm, and another goat breed has joined the Nubians… the Guernsey.

Thrifty Homesteader is a participant in the Amazon Services LLC Associates Program, an affiliate advertising program designed to provide a means for sites to earn advertising fees by advertising and linking to amazon.com. You pay the same price when you purchase through affiliate links as you would if you went directly to Amazon, and our site earns a small commission, so by shopping through our links, you are helping to support our blog so that we can continue to provide you with free content.
103 shares
103 shares