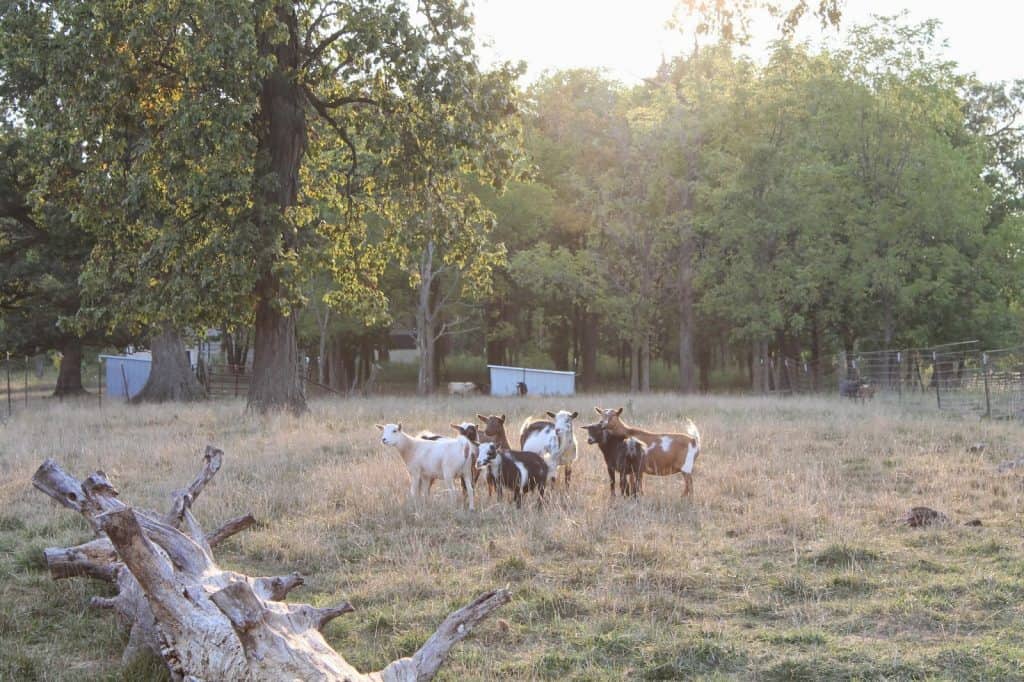 my herd with three does and a buck. Knowing that goats are herd animals and need company, I was buying my buck from a breeder who was going to give me a wether for company. However, after driving six hours to pick them up, I discovered that the wether had a poopy back end, which meant coccidiosis, and being new to goats, I didn’t want to bring home a sick animal. So, I brought home the single buckling, wondering how I would keep him from getting lonely.

We thought we had a great idea. We put together four livestock panels to make a 16-foot by 16-foot square pen for him in the middle of the pasture where the does live. We had no idea he would be unhappy having a fence between him and other goats, and we spent weeks coming up with one alteration after another to keep him separated from the does. He quickly realized he was small enough to squeeze through the squares in the panels, so we wrapped the whole pen with chicken wire. He learned to hoist himself up high enough to go through the squares that were above the chicken wire. We added more chicken wire. He started jumping over the panels. We bought more panels and put them on top of the pen so that he couldn’t jump out. It was so complicated that it took us five minutes to get into the pen, but finally, Bucky could not get out!

The following year when we bought a second buck, we built a separate pen for them, and for some reason that I no longer remember, my husband, put the latch on the inside of the pen. It was a slide bolt style that you lift and slide to open. One day I looked out into the pasture and saw Bucky chasing after the does. I accused my children of leaving the gate open on his pen and told them to go lock him up. Less than fifteen minutes later, he was running around out there again. My children insisted they had locked the gate. This time I went out and put him back in his pen. I turned my back but had not even left the pasture when I realized he was running past me to get to the does. He had learned to open the latch!

Goats are incredibly intelligent animals and will copy human behavior to do things like unlatch gates, turn on lights, and even attempt to open doors. We once had a LaMancha doe that would put her mouth over a doorknob and turn her head in an attempt to turn the doorknob as she had seen us do. If only her mouth had not been wet and slippery, I’m sure she could have actually opened the door!