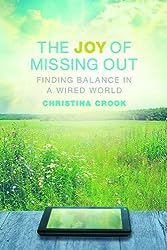 Do you think you spend too much time online or on some websites? Do you check your email every ten or fifteen minutes? Is your smart phone within three feet of your body 24/7? Does your two-year-old play with your smart phone? Do you worry that you might be addicted to the Internet? If you answered yes to any (or all) of these questions, you are not alone. Although you might be relieved to hear that, it is not good news!

While reading Christina Crook’s The Joy of Missing Out: Finding Balance in a Wired World

, I was frequently horrified. Overusing the Internet is not simply a bad habit. It is physically addicting. It causes our bodies to release dopamine, which is a feel-good hormone and explains why we keep checking our inbox over and over again. But just as addictive drugs only keep us happy for a short time, so too does the Internet, which is why we keep going back again and again for another hit. One study found “that for every additional hour kids spend online, their happiness decreases eight percent.” She cites one study that found that one in ten North Americans have admitted to texting during sex, and in the 18 to 24 year age group, that number is one in five! And things in the U.S. are not nearly as bad as in many Asian countries. Crook tells us, “more than half a million of Japan’s children ages 12 to 18 are addicted to the Internet.”

If you think that calling this an addiction is an exaggeration, check out this quote:

“We (as app makers) want them to be addicting. Like a potato chip manufacturer, we try to put just the right crunch and the perfect amount of salt so you can’t help but have just one more. We want you to get addicted. It puts the potato chips on our table,” says mobile app developer Jeremy Vandehey.

Don’t assume that Crook is a luddite who has shunned technology. On the contrary, she says she was as addicted as anyone back when she decided to go on a 31-day Internet fast. A small part of the book is devoted to what she learned during the month, but most of it tells us about the overall problem and how it is affecting us, along with some ideas on how to curb our use.

Many chapters end with a set of questions to get you thinking, such as,

Overall, this is a great book for helping us to re-examine our use of technology and keep it in check.