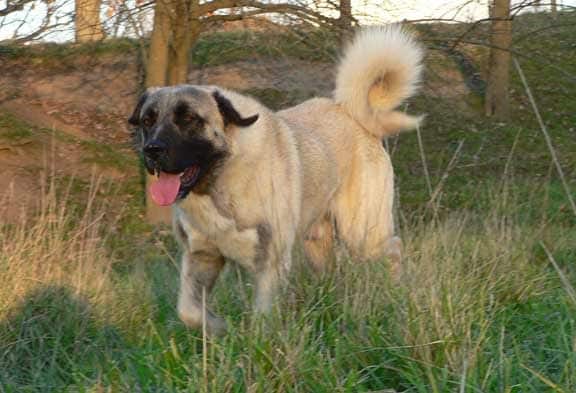 Many people think a dog is a dog, but when it comes to working dogs on farms, nothing could be further from the truth. Just as you would never hire an unqualified person to do a job in an office, you should not get an unqualified dog to do a job on your farm. While you might laugh at the idea that a chihuahua could herd sheep, plenty of people have gone to the local animal shelter to get a large dog to “guard” their livestock. The results can be anywhere from merely disappointing to completely devastating.

Just as every dog cannot herd sheep, many dogs have no interest in guarding livestock, and some will even kill or injure them. Many dogs will chase and attempt to play with chickens, ultimately causing the death of the bird. We once had a visitor to our farm who had a shih tzu that immediately took off after the chickens the second she was out of the car. Her owner screamed and screamed, but the dog was completely deaf and continued chasing the chickens until she was caught by my children. I once heard the story of someone who purchased a mixed breed dog to act as a guardian for his goats, and the dog wound up killing and eating a goat kid. 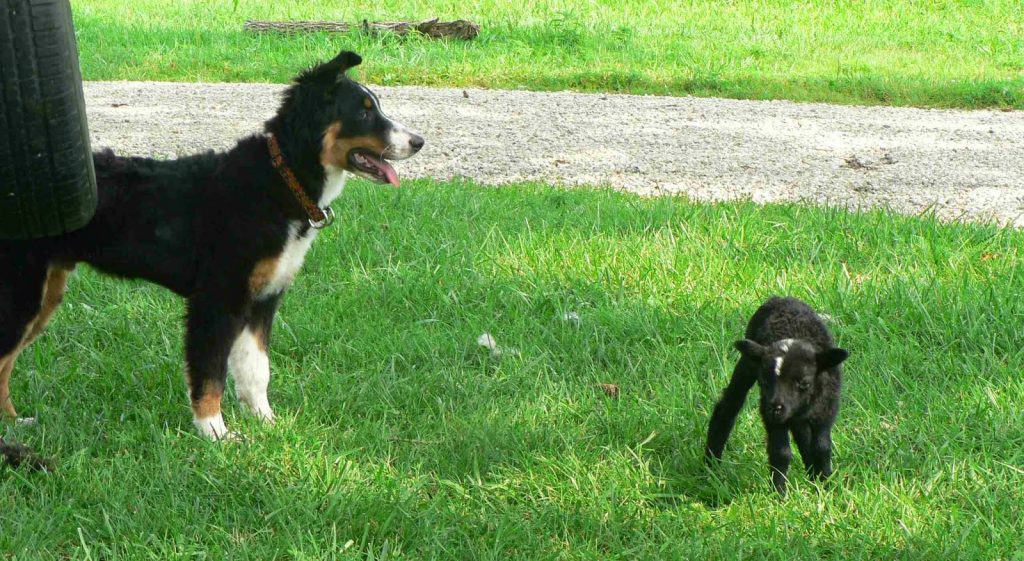 Even if, like me, you have owned dogs your whole life before getting livestock, you have to understand that farm dogs are a totally different animal than what you are accustomed to. Here are a few tips to help you avoid disappointment and heartache:

1. Choose a breed that is known for doing the job you want done. If you want a herding dog, buy a herding breed, such as a Border Collie or English Shepherd. If you want a livestock guardian, buy one of the LGD breeds, such as Great Pyrenees or Anatolian Shepherd.

2. Buy a dog from a working farm. The best farm dogs have lived among livestock from the day they were born. My best livestock guardians were dogs that were born and raised in the barn and pasture with a herd of goats. One problem with Border Collies and Great Pyrenees is that they have become so popular as pets, they are now often raised by people who are not on farms, so you will have no idea whether their dogs possess the genetics needed for being a working dog. 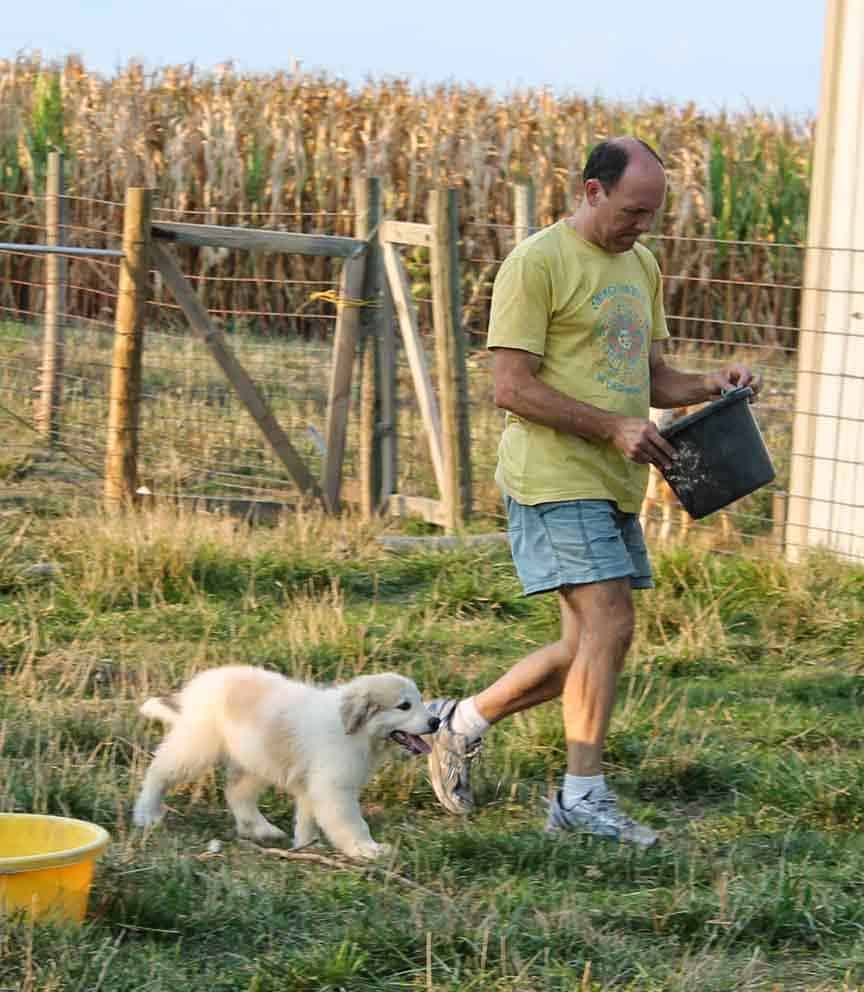 3. Buy from a farm that believes in socializing their dogs. There is still an old school of thought that livestock guardian dogs should be handled as little as possible. This can result in dogs that are dangerously shy towards people, even their owners. A good livestock guardian will protect its stock from strangers, even if it has been socialized and is accepting of strangers when they are brought into the pasture by the owner.

4. Go to the farm that is selling the dog so you can see how it and its parents interact with the livestock. When buying my first two Great Pyrenees puppies, I did not realize that it was a bad sign that one of the parents was chained up 24/7. Had I asked about that, I might have learned that he was a chicken chaser. Both of the puppies I bought from that farm later had to be re-homed as pets because they were constantly chasing and killing poultry. 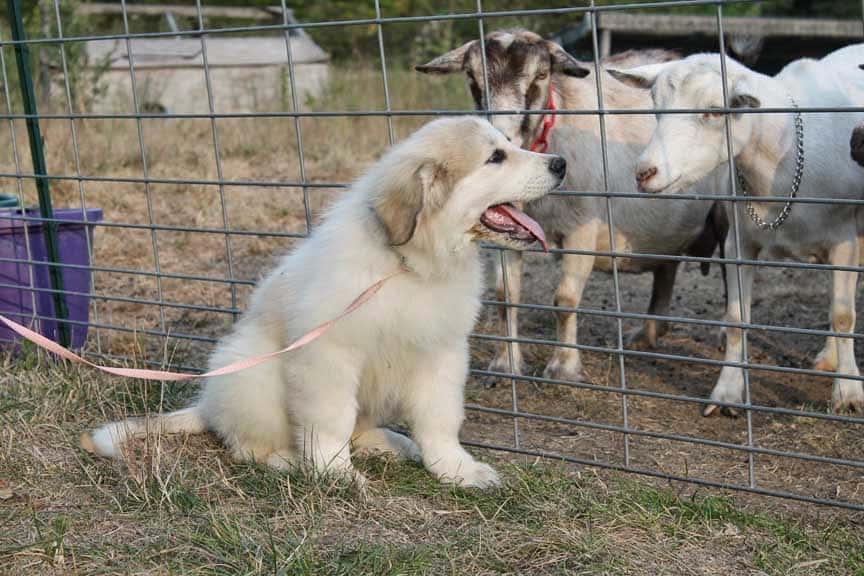 5. When introducing a new dog to your livestock, keep the dog on a lead until you feel confident that it won’t be chasing or attacking your animals. This may be 15 minutes or several days, depending upon the dog.

6. If you do not have confidence that the dog will behave, do not leave it with your livestock, whether it is day one or it has been with the stock for several months. Some dogs will go through a dangerous adolescent stage when they suddenly start chasing animals. Do not ignore this because it could result in the death of an animal. During this time, you need to tie the dog or not let it in the pasture with animals when you are not there to supervise. 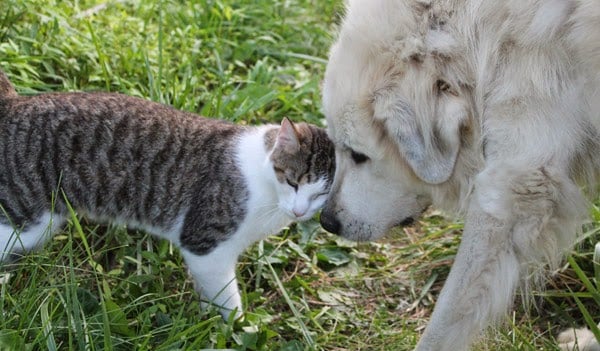 7. Re-home a dog as a pet if it turns out to be incompetent as a farm dog. If a dog begins to act aggressively towards livestock, there is no point in keeping it. A good farm dog has to be trusted unsupervised with livestock, and if you can’t trust a dog, then it is not worth the risk to keep it on the farm. Not every dog will be a competent livestock guardian or herding dog, even if it did come from the right parents and the right background.