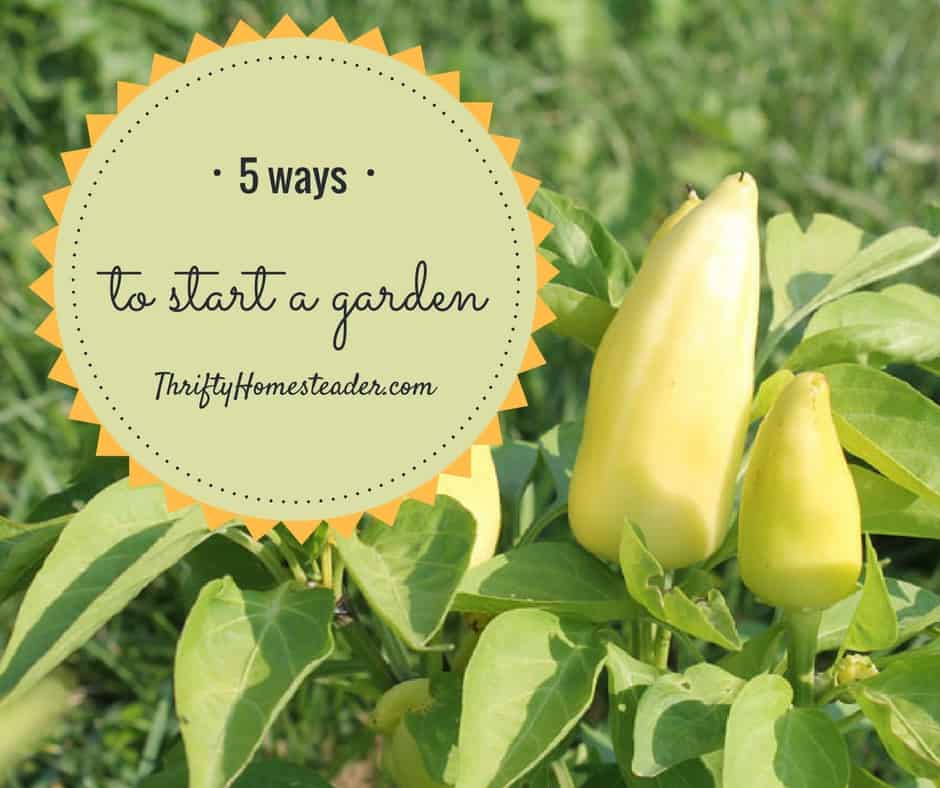 You might think that if you want to start a garden you need to buy a gas guzzling tiller. But that is only one option. There are actually several ways to start a garden without using a tiller at all. Here are five methods that we’ve used.

This is exactly what it sounds like. You plant vegetable seeds and transplants in straw bales. Bales are usually tied together with two strings. It works best if you put the bales on their sides rather than putting the strings on the ground. This helps to keep the straw together, but it also makes it easier to separate the straw for planting. One word of caution — ask your straw supplier if the straw was ever sprayed with weed killer. If so, the residue may kill your transplants or cause your seeds to fail to germinate.

I never had raised beds until I volunteered to help with our church community garden. Several other volunteers said they would not help unless we had raised beds. I admit I really did not see the attraction until I actually started working in raised beds. It is amazing how much easier it is to work in garden beds that are a foot off the ground. It doesn’t sound like it would be that awesome, but it is.

You can create raised beds by simply nailing together a square or a rectangle of 2-inch by 12-inch boards in whatever length you want. At our church, we had 4-foot by 12-foot beds. After getting spoiled by them, we built some here, and they’re 4-foot by 8-foot. You really don’t want them wider than four feet because you want to be able to reach into the middle easily from either side of the bed. We made eight-foot beds here because I didn’t want to try to bring home boards longer than eight feet.

Once the bed is built, fill it with soil and your choice of amendments, such as sand, compost, straw, etc. If you are creating raised beds at least three months before you’ll be harvesting above ground crops and four months before harvesting root crops, you can also mix in some raw manure. 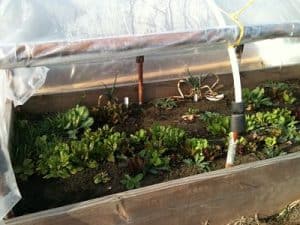 If you have raised beds, it is easy to create low tunnels and cover them with greenhouse plastic, so you can grow year-round. This picture shows our low tunnels in March. The plants have been there since early fall. Row covers combined with greenhouse plastic kept the raised beds toasty and warm all winter in spite of temperatures that sometimes fell below 0. The sun heats up the ground during the day, the low tunnel traps the heat, and overnight the ground emits that heat to keep the plants from freezing.

Put down plastic to kill grass

If you’ve ever left a kiddie swimming pool or a tent in one place on your lawn for too long, you know this works. It kills the grass. If it’s there for only a week, it will take at least a few weeks for the grass to grow back. If you leave it there for a month or longer, everything should be dead. Dig holes to plant your transplants, and add mulch to control weeds in the future.

If you have a larger area that you want plowed up but don’t have a tiller or a tractor, use pigs. They’re nature’s plowing champions. They love using their shovel-like snouts to dig in the dirt. They actually love to eat the weeds, grass, and roots, so they’re feeding themselves too. Leave them in there until you don’t see anything green. You need to go in with a rake to level everything as soon as you remove them from the area while the soil is loose. After a few rains, the soil will get hard, and you will have a lot of holes and bumps that will be challenging to flatten.

BONUS: they’ll add fertilizer while they’re plowing! However, that also means that you can’t harvest anything for 3-4 months after you remove the pigs. We usually put the pigs in an area in the fall and leave them there all winter. We remove them from the area about four months from the time when we expect to start harvesting from the area. 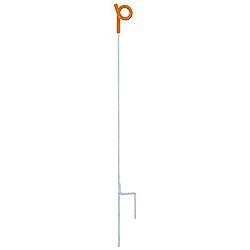 To keep them fenced in, you’ll want to use some type of electric fencing. If they’re already trained to electric, you can probably use a single strand of electric with pigtail posts (pictured). Otherwise, you’ll need to use ElectroNet for sheep and goats or poultry netting. You will want to be there when they’re first introduced to the fencing so that you can get them untangled if they attempt to go through it. Do NOT put pigs in your garden and expect welded wire to keep them contained. They can rip through that without even trying hard. (Do I have to tell you how I know this? Remember I make all the mistakes so you don’t have to.)

Sure, you can use a tiller, but it really isn’t our first choice. In fact, last year we broke new ground to expand our garden, and we were disappointed at how stubbornly the grass kept trying to come back. So, even though we have a tiller, last fall, we laid down plastic tarps on the new garden areas so that the grass will die.

I’ve also heard of people using old pallets. We’ve never tried that one, but I’ve heard that you lay the pallets flat and put potting soil in the cracks. Have you ever tried that? Do you have any additional methods for starting a garden? Share in the comment section below.

Thrifty Homesteader is a participant in the Amazon Services LLC Associates Program, an affiliate advertising program designed to provide a means for sites to earn advertising fees by advertising and linking to amazon.com. You pay the same price when you purchase through affiliate links as you would if you went directly to Amazon, and our site earns a small commission, so by shopping through our links, you are helping to support our blog so that we can continue to provide you with free content.
548 shares
548 shares