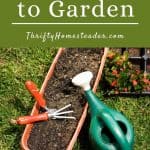 For some people, the idea of starting their first garden and growing their own food can seem overwhelming. For others, it might seem ridiculously easy. You just plant seeds, and they grow—right? “But there is so much more to it,” say the overwhelmed future gardeners. The soil temperature has to be just right, and you need to choose the right plants for your climate, plant them on the right date, give them the right fertilizers and nutrients, mulch, weed, and worry about insects and disease. The truth is somewhere in the middle. If you are the perfectionist type, you will be able to find plenty of books and magazines to give you all of those little details, and you will probably have a garden that is the envy of your friends and neighbors. However, if you are the relaxed type who doesn’t want to follow a long list of rules, you can still grow your own fruits and vegetables.

What do you need?

Many people think you need a big yard with good soil to garden, and although that’s nice, it is not necessary. You do not even need soil. Sprouts can be grown in a jar with water. Basil can be grown hydroponically over a fish aquarium. Herbs can be grown in a pot on a sunny windowsill or under a grow light. Tomatoes and peppers can be grown in large pots on a balcony or patio. I’ve even heard of people growing potatoes and some varieties of corn in five-gallon buckets. Of course, a large backyard garden is the dream of many who want to become more self-reliant, where they can grow dozens of different fruits and vegetables. As the months grow colder, you can extend the harvest by using low tunnels and cold frames, or for an even larger winter harvest, a high tunnel or greenhouse.

Organic container gardening is much easier today than in the past because it is now possible to find organic seed-starting mixes and potting soils at most garden centers and through plenty of online stores. It used to be more challenging because all of the available commercial potting soils contained chemical fertilizers that were not intended to grow food plants. In most cases, if you simply put dirt from your yard into a pot, you will discover that it is rock hard after a couple of waterings and that nothing grows.

The first thing you need to know is that seed-starting mix and potting soil are not the same thing. Seed-starting mix usually does not contain soil at all. Most have a large percentage of either peat moss or coir. Many environmentally aware gardeners are opting for coir these days because it comes from coconut fiber, which is renewable, although it does have to be shipped from tropical parts of the world, usually Asia. Peat moss is a North American product, but it is harvested from wetlands, which effectively destroys all life forms in the bog. Environmentalists claim that destroying wetlands is as bad for our ecosystem as destroying rain forests.

The Canadian Sphagnum Peat Moss Association (CSPMA) says that their producers are harvesting less than one of every six thousand acres of peat bogs in their country, which amounts to roughly 0.017 percent (less than one-fifth of 1 percent) of the existing bogs. They argue that peat is a renewable resource because sphagnum moss will regrow on a bog after harvesting is complete. Peat, however, is decomposed moss, which environmentalists claim will take thousands of years to be replaced. The CSPMA says it will take hundreds of years to replace all of the peat, which they do not consider to be unsustainable because they are harvesting peat from such a small percentage of the total bogs. They say a bog will regenerate naturally within twenty years, but they can shorten that time to five to eight years by “transplanting live sphagnum plants, seeding spores of sphagnum taken from live plants, and covering the harvested bog with the top spit from a living bog.”

There is now a Responsible Peatland Management certification program. As of 2014, at least 65 percent of peat harvested in Canada was certified. That means that the company harvesting it had a rehabilitation and restoration program in place and actually implemented it. Companies must also file annual updates to show that the bogs are improving.

If you are buying large amounts of seed-starting mix, the local availability of coir or peat moss may be a determining factor. You will need seed-starting mix only if you are starting seeds. If you have a small garden or are creating a container garden, it will probably make more sense for you to buy started plants at a local garden center and transplant them into your containers with potting soil, which may also contain peat moss or coir.

Potting soil does contain a large percentage of dirt. So why not dig up dirt from your yard? Potting soil has been sterilized, which means there should be no weed seeds, grass seeds, or other seeds that will start growing in your container and compete with your transplants for water and nutrients. It also means there should be no bacteria or soil-borne diseases present, which may kill your plants. Most potting soils also have fertilizers added, which is why you want organic potting soil for your fruit and vegetable plants. And potting soil is more than just dirt. It also usually has coir, peat moss, vermiculite, or perlite added.

If you have opted for container gardening, you will need containers, of course. This is largely a matter of personal preference, as almost any container—from fancy pots to used five-gallon buckets—will work as long as there are holes for drainage so that the roots don’t sit in water. Like people, most plants don’t like their feet to be wet all the time. If you are repurposing buckets, simply use a drill to put a few holes in the bottom of each one. If you have a bucket with a cracked bottom, it can have a second life, rather than going to the landfill.

When creating a traditional backyard garden, many people assume that an expensive, heavy, gas-guzzling tiller is required, but it is not. There are several ways you can kill the grass naturally to transition a section of lawn into a garden. Plants need water, air, and light to survive, and grass is no different. If you have ever left a children’s little swimming pool in one spot of your yard for too long, you know exactly what I am saying. In fact, placing a children’s swimming pool on your lawn for a couple of weeks is a great way to create a perfectly round garden bed. You can also use an old shower curtain, several layers of newspaper, grass clippings, or any number of things to deprive your lawn of the water, air, and light it needs to survive. In fact, this is a great first step, even if you do have a tiller. Sod busting is hard work.

If you have any physical limitations, such as arthritis, that might keep you from being able to work at ground level, a raised bed might be the answer. You can create a raised bed with two-inch by twelve-inch boards nailed into a square or rectangle. This is also a good option for people who live in newer subdivisions where the builders have scraped off the topsoil and left the yard with soil that is too heavy with clay or too sandy to be a good growing medium. Raised beds can be filled with topsoil that is purchased by the bag at garden centers, or if you have a large garden with several raised beds, you can have the soil brought in by truck. This also makes it easy to create the perfect growing medium by mixing in compost, peat moss, perlite, or other amendments when filling the beds initially.

Although tools are not necessary when container gardening, two basic tools will make the job easier when working in a full-size garden. A trowel, which looks like a hand-size shovel, makes transplanting easier. A hoe can be used to create a furrow for planting seeds and to eliminate weeds quickly. Although these tools can be purchased cheaply at discount stores, you might find that the quality is not as good as those that are more expensive and purchased at garden centers.

This is an excerpt from Homegrown and Handmade: A Practical Guide to More Self-Reliant Living, second edition, by Deborah Niemann.