Hello Thrifty Homesteader readers! I’m Cadence, a freelance author’s assistant who occasionally helps Deborah with some of her projects. I just relocated to Merrie Olde England and Deborah has asked me to pen a few posts about some of my adventures in the farm and food culture of London.

Britain is such a small country (roughly the size of Idaho), and yet it produces a great variety and quantity of food. In the 1980s it was reported that Britain produced nearly 80% of its food. Though that number has been dropping since then, the same article stated that the number was still nearly 60% in 2010. Britain also still has a vibrantly supported farm system, which means that it’s very easy to find not just fresh produce but also meat, dairy products, and even game almost anywhere in the country. Just as you’re never more than 75 miles from the sea, I’d guess you’re never more than 15 miles from some kind of significant food producing venue. Many of them historic, traditional, or just heritage minded.

Even in the city, we aren’t too far away from the farm! Last Saturday I went to Portobello Road to browse through the famous antiques selections and stumbled across a surprising sight! 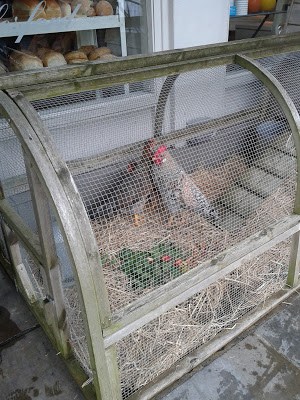 Chickens in the city!

I had found the Notting Hill based shop of Daylesford Organic Farm, a rather famous farm in Gloucestershire. I was so surprised to find live hens clucking on the pavement that I went straight in to look around and ask questions (I admit there’s little I love more than exploring!) and here’s some of what I found out:

Daylesford Farm itself is an award winning venue, somewhat renowned for its commitment to sustainable farming and for its openness to the public. It holds several events a year, from harvest festivals to scheduled cooking classes, and welcomes visitors who want to view (or occasionally participate in) the day to day running of the farm. 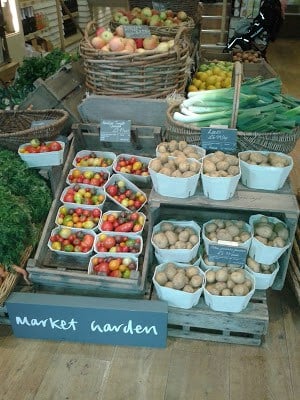 Daylesford’s city shop is impressive! It’s stocked daily with seasonal produce, dairy products from the farm’s creamery, meat that has been raised on site, even organic pre-made soups and salads. The day I happened upon those chickens also coincided with the launch of
the farm’s latest cookbook and their Autumn Farm Fair and food tasting event.
You can bet I took advantage!

One of the first things to meet my eye was a huge pallet of fresh eggs shipped from Gloucestershire. The meat was housed in a proper butcher stall where you can buy any cut you’d like. They had one of the farm bakers on hand giving presentations about the different kinds of loaves baked on the premises, what made them unique, and a bit of history about each as well. There was a cheesemonger as well doing the same with the vast dairy offerings. I was really impressed at how much I found to be educational. 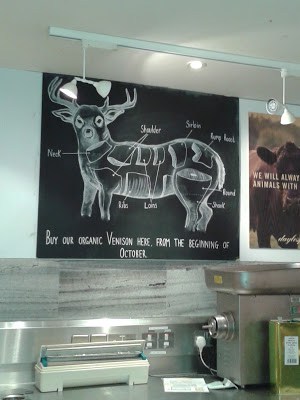 There were even some surprises! It’s not uncommon to find a much wider variety of meat in British stores than American, but the farm shops and markets really spoil you for choice. The farm shop also included an organic cafe where patrons can order meals crafted directly from the farm’s givings.

The Daylesford shop is far from unique in London. Many farms or creameries have kiosks or stalls where they sell their wares at any of the city’s famous markets, and not a few have their own stores like this one. In a lot of ways, farm and artisan shops are able to use a lot of modern business practices, such as the idea of developing and growing a brand and utilizing social media, while allowing producers a great deal of control over how they grow and market their wares. And instead of going through several middlemen, it is possible for even smaller producers to craft and sell food goods directly to consumers. All of this while passing on not just artisan knowledge of food production, but a certain involvement on the part of the consumer on where their food comes from. I’m not an expert, but it seems a much more symbiotic system than much of what I’ve seen of food production and sale in the US.

I really enjoyed the farm shop, and I’m already planning on visiting the farm itself at some point next year, hopefully during one of its harvest parties or summer events, to see it for myself. And if you’re ever in Britain and want to try something a little different from the normal tourist traps (which I highly recommend), they welcome visitors! 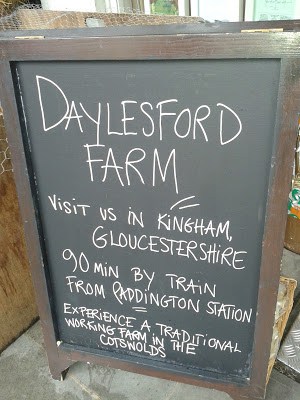 I’ve attended my share of farmers markets, but I haven’t found many farm shops in the US so I’m curious as to what experience readers of The Thrifty Homesteader may have had with them. Are they common in your area or virtually unheard of?

I’m really looking forward to sharing what I find about the surprising food and farm culture of London. In my next post I’m going to take you on a bit of a tour of some of London’s most famous markets, and I hope to be able to check out some of the urban farms (of which there are a surprising number). If you have any questions you’d like me to investigate, rumors you need debunked, or even just questions about food in Britain you’d like me to cover, please share them in the comments!