London is a remarkable city for a lot of reasons, but one of them is the amount of green space it has. It has more parks than almost any other city in the world and almost all of them are open to the public. There are gardens, greenways, and many informal natural spaces – the largest of which is a full 790 acres!

But this isn’t really surprising in some ways. The Brits are famous for their love of nature and gardens and even today it’s unusual to find even a cramped city flat that doesn’t have some kind of growing thing. But then there are some who do a lot more with their urban spaces: whole farms!

Admittedly as a person with no experience of them, while I wasn’t surprised to hear that there was an urban farm just twenty minutes from our flat, I truly had no idea what one would be like. Which meant, of course, that I had to investigate! 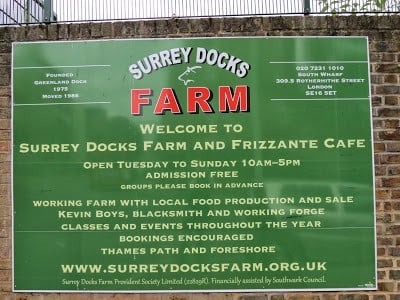 Welcome to Surrey Docks Farm, located very nearly in the financial center of London. Open to the public daily, it claims to be the only urban farm in the city open seven days a week, and though it is less than three acres, it prides itself on being a real hands on and educational venue. Classes and educational events are put on regularly, produce grown on site is sold to the public, and there’s even a small café that cooks its wares with the harvested bounty.

Surrey Docks got its start as a project to turn the once pretty run down (and occasionally sordid) shipping docks area around a little. It’s endured a few troubles over the years, including an arson attack and the theft of one of their beloved ferrets most recently, but in spite of that it’s become rather a fixture of the Rotherhithe area of London.

I was really surprised at how much was organized in the farm’s space so well. There are several pasture areas for the grazing animals, multiple plots and raised beds, berry bushes, grape vines, fruit trees, a duck pond, and an enclosed area where the goats and chickens mingle to the delight of visitors. All of this exists on less than three acres…literally right next to the Thames!

I visited during their annual Harvest Festival which meant that in addition to their usual attractions, they had stalls selling additional wares (jams, oils, herb packets, seeds, and so on) and a number of volunteers on hand to answer questions about the day to day running of the farm.

The animals were also out in full force and there were lots of opportunities to interact with them. The sheer number of them really amazed me! I counted two donkeys, one pony, two massive hogs, at least five other pigs, a small flock of geese and ducks, and at least a dozen goats. The chickens were innumerable! 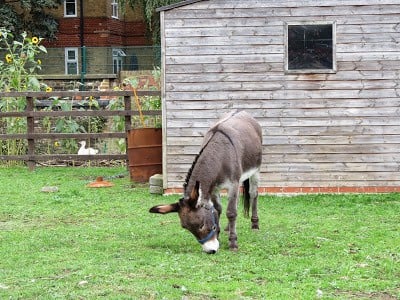 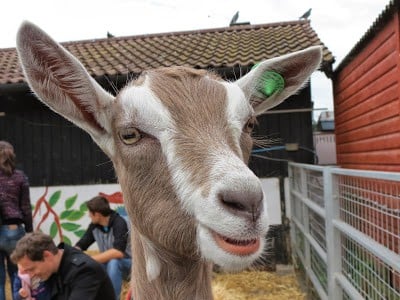 I always imagined that farms had to be large to create large quantities of produce. Seeing Surrey Dock Farm was a real revelation. That 2.2 acres could hold so much livestock alone really impressed me. I’m not an expert by any means, and although the enclosed areas weren’t large, there seemed to be a decent amount of space designated to each group of animal. But to add to it, the vegetable produce for sale and the education spaces was really impressive.

While I do have experience helping my father on our family’s land, ours is not a farm and we don’t keep any livestock or even garden (Dad’s goal is to maintain most of it as a natural wilderness). I’ve never worked or lived on a farm so while I had some general ideas on how they operated, I was largely ignorant. Getting to see an operating site in compact form was really eye opening. From the workers explaining the nutritional needs of their individual breeds to demonstrating how they lay out their plots for rotational planting, it was a real education.

And in case you’re thinking Surrey Dock is a lone example, I was bowled over to discover how many urban farms London has, one or two of them fairly large! And most operate on the same model of combined production and education. They are extremely popular with families and often contribute to the large number of markets around the city in addition to selling their own goods. Britain may have spent the last three centuries becoming an industrial power, but even in the depths of the country’s capital, agriculture here is alive and well!

Since I’m still pretty ignorant, let me know in the comments if there is an urban farm culture in your area and how it interacts with the community. Are they popular? Utilized? Ignored altogether? And what benefits or challenges do they bring to their areas? I’m interested to learn more and plan on visiting a few more urban farms in the future, if nothing else to bring home some of the wonderful produce!

Cadence Woodland is a freelance author’s assistant and writer. Her journalism has contributed to the New York Times, the National Wildlife Federation, and other venues, but she can be found most often at her blog where she writes about her adventures across the Pond in London.