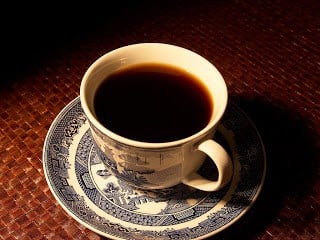 A couple of weeks ago I was being interviewed on a radio talk show, and after I said that people could save a lot of money by making their own coffee at home instead of buying it at a coffee shop, the interviewer seemed to suddenly panic and was quick to interrupt and say, “But we’re not telling people to stop going to coffee shops! Sometimes you have to go out and have a cup of coffee with friends …” and he went on for a few more sentences, chuckling nervously. My first thought was that there must be a coffee shop that advertises on his show and he was worried about losing their ad money, but I think that a lot of people have the misconception that you have to go into an ecothrifty lifestyle a hundred percent or not at all.

Nothing could be further from the truth. You don’t have to toss out your electric clothes dryer or stop buying a latte on the run. The most important part of an ecothrifty lifestyle is to simply start thinking about how you’re spending your money.

We drink organic, shade grown, fair trade coffee, and it costs us 80 cents to make a 12-cup pot, which is far less than it would cost to get a single cup at any coffee shop, restaurant, or fast food establishment. Some people don’t make coffee at home ever. If you fall into that camp, just start thinking about how much money you could save every day if you made your morning cup o’ joe yourself. You can even get a coffee maker with a timer, and it will be ready for you when you wake up. And if you are the only coffee drinker in your house, you can get one of the single-cup coffee makers.

Owning a coffee maker and using it does not make it illegal for you to ever stop at a Starbucks and have a cappuccino. When I’m traveling, I often get a cup of coffee in the middle of the afternoon, especially if I’m in the middle of a long drive. If I were more organized, I might think ahead enough to put some coffee in a thermos for one of my long drives, but believe me when I say (sadly) that I’m not that organized.

And I’m not just talking about coffee here. We own a clothes dryer and a clothes line. I shop at thrift stores, garage sales, and department stores, and I’ve had a friend make some of my clothes for me. We cook meals at home when we’re here, but I eat out when I travel or am spending the day running errands. Again, I wish I were organized enough to pack a lunch, but alas, I’m not — at least not yet! And the list goes on.

I’m absolutely certain that the reason a lot of people won’t even try to live a more ecothrifty lifestyle is because they think it’s all or nothing. I’ve often heard people say that they’re not going to give up their _________. Well, you don’t have to! You can have the best of both worlds. Save money by making your own coffee and using a clothesline when you can, and go the more expensive route when you need to. If you happen to be driving through a nice neighborhood and you see a garage sale, pull over and have a look. There is nothing like the adrenaline rush of finding beautiful, like-new clothes for a buck or two each!

I can understand why people avoid making positive lifestyle changes if they think that they have to be committed one hundred percent. I can’t imagine that very many people actually succeed if they try to do that. I’ve been on this path for more than two decades. It’s all about baby steps and gradually changing your life. Small doable changes become habits, whereas you are much more likely to fail if you try to make drastic changes overnight. No one is living the perfect ecothrifty life. We’re all on the same path, doing what we can to save money and live a greener life.

6 thoughts on “It’s NOT all or nothing”