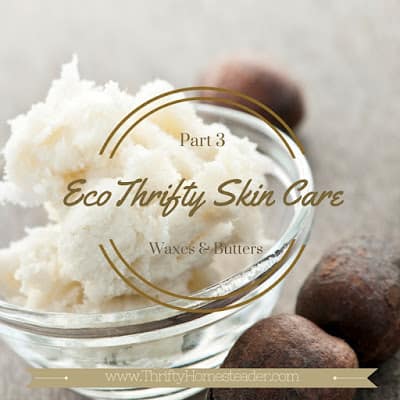 Waxes are another popular ingredient in skin care products. Unlike oils, which tend to go rancid within a few months to a year at room temperature, waxes last a long time.

Beeswax — In addition to being used to make candles and to polish furniture, beeswax is a popular ingredient in lotion, lip balm, soap, and other skin care products. It moisturizes skin by helping retain moisture and is also reputed to have antiseptic properties, historically being used for healing wounds.

Jojoba — Although you often see the term “jojoba oil,” jojoba is a wax, rather than an oil or a butter. Being a wax, it has a very long shelf life. It’s liquid at room temperature and is very slippery, so it is great as a massage oil and used in skin care products. It is not digestible, however, so should not be used in cooking.

Lanolin — My children grew up putting pure lanolin on their lips during our dry Illinois winters. The consistency is similar to petroleum jelly, but it comes from wool rather than petroleum. When wool is sheared from sheep, it is coated with lanolin, which must be washed off. A substance that comes from sheep may not sound appealing, but use it once on cracked and bleeding lips in the middle of winter and you will be singing its praises forever. I first learned about lanolin twenty years ago when I was a lactation consultant. Its healing properties seem to be nothing short of miraculous for anyone with damaged skin, whether it is a breastfeeding mom with cracked nipples or a construction worker with cracked elbows. Lanolin added to recipes makes a soap that even the driest skin can tolerate, although it seems like a waste to let it wash down the drain.

While oils contain only the oil from a plant, a butter may contain other parts or components of a plant, which is why it is not liquid at room temperature. In some cases, you will find an oil and a butter have been produced from the same plant, such as olive oil and olive butter or avocado oil and avocado butter. Typically, butters are used in body butters and scrubs, while oils are used in soap recipes. 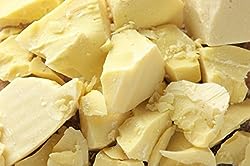 Cocoa butter — I started adding this to my castile soap recipe because I wanted a harder bar that would not dry out my hands and this accomplished both of those goals. Cocoa butter is one of the few oils or butters that can be purchased non-deodorized, but don’t get your hopes up about making your soap smell like chocolate. It is used so sparingly in most soap recipes that the fragrance of the cocoa is diluted and lost. Cocoa butter can be temperamental, separating when mixed with some oils, so it is not always a good choice for making creams.

Shea butter — I first used shea butter in a sugar scrub and I was an instant fan. It melts on contact with skin and is an excellent moisturizer. It is best to use shea butter in recipes that do not require melting because that can cause it to become granular, which does not feel nice when rubbed into your skin. When buying shea butter, ask the supplier if they melt it during packaging, and avoid buying from suppliers that say yes. Most know that melting will cause graininess and will avoid the practice.

This is an excerpt from Ecothrifty: Cheaper, Greener Choices for a Happier, Healthier Life by Deborah Niemann. It is part three of a four-part series on moisturizers.

Thrifty Homesteader is a participant in the Amazon Services LLC Associates Program, an affiliate advertising program designed to provide a means for sites to earn advertising fees by advertising and linking to amazon.com. You pay the same price when you purchase through affiliate links as you would if you went directly to Amazon, and our site earns a small commission, so by shopping through our links, you are helping to support our blog so that we can continue to provide you with free content.
14 shares
14 shares