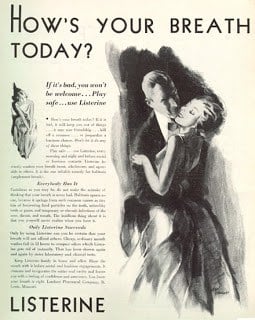 The short answer is no. But what about all those ads that say mouthwash is awesome and does awesome things for your teeth and gums? Well, they’re ads. They’re trying to sell mouthwash.

Unfortunately, mouthwash is worse than simply useless. It can actually be harmful. One study found that people who use mouthwashes with a high amount of alcohol in them are at an increased risk of oral cancer, which has a mortality rate of 50%. Smokers who used mouthwash were nine times as likely to get oral cancer as sometime who didn’t smoke or use mouthwash. What’s high alcohol content? Listerine in particular has more alcohol in it than beer or wine. For more on that story, click here.

A lawsuit was filed against Johnson and Johnson in 2010 for the claims they made about their Listerine Total Care Anticavity Mouthwash, which they claim —

fights plaque above the gum line, prevents cavities, freshens breath,
restores enamel, kills bad breath germs, strengthens teeth, is the most
complete mouthwash, and allegedly advertises it as an FDA-approved drug
that fights gum disease, even though the only active ingredient in
Listerine Total Care Anticavity Mouthwash is sodium fluoride which has
not been recognized by the FDA to fight plaque, a precursor to gum
disease, according to class action lawsuit news reports.

Listerine is not the only one though. In 2013, a class action lawsuit was settled against the makers of ACT Total Care mouthwash because they also claimed that their mouthwash “fights plaque” when its only active ingredient was also sodium fluoride.

In 2010, the FDA accused Johnson & Johnson, CVS, and Walgreens of false advertising and ordered them to remove claims on their mouthwash labels that said they fought gum disease and plaque. Those mouthwash companies are stubborn though.

The makers of Crest Pro-Health mouthwash were sued by the makers of Listerine back in 2006 because of an ad that claimed four out of five dentists recommended Crest mouthwash. Crest’s claim was based upon the fact that they had paid 269 dentists $75 to give them their opinion on the mouthwash question.

And if you quit flossing a few years ago because you saw an ad that said mouthwash was as good as flossing, toss the mouthwash and go back to flossing. Listerine was sued for false advertising and ordered to stop running that ad.

Sadly, Listerine probably wins the prize for quantity of false advertising, but they have been around the longest. I remember their ads back in the 70s that claimed you could prevent a cold if you gargled with Listerine. That one made Time magazine’s “Too-Good-To-Be-True Hall of Fame.” 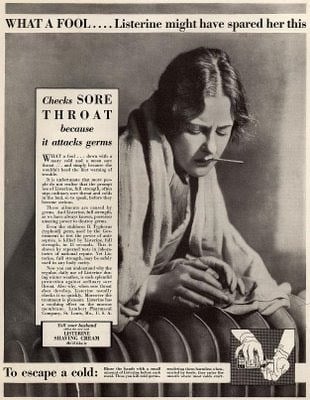 And their false ads even pre-date my life. Apparently they’d been claiming to prevent colds and cure sore throats for decades before the Federal Trade Commission stepped in and made them stop in 1976. I remember their ads from the 1970s telling you to gargle with Listerine
any time you got cold or wet. It’s no wonder the idea that cold causes
colds is so ingrained in our culture — Listerine was telling us that
for more than fifty years.

It was originally created as a surgical antiseptic, but how much money can you make selling surgical antiseptic? So, they started looking for alternative uses and realized that it cures halitosis, otherwise known as bad breath. It then became the first mouthwash in 1914, and sales went from $115,000 to more than $8 million in only seven years. 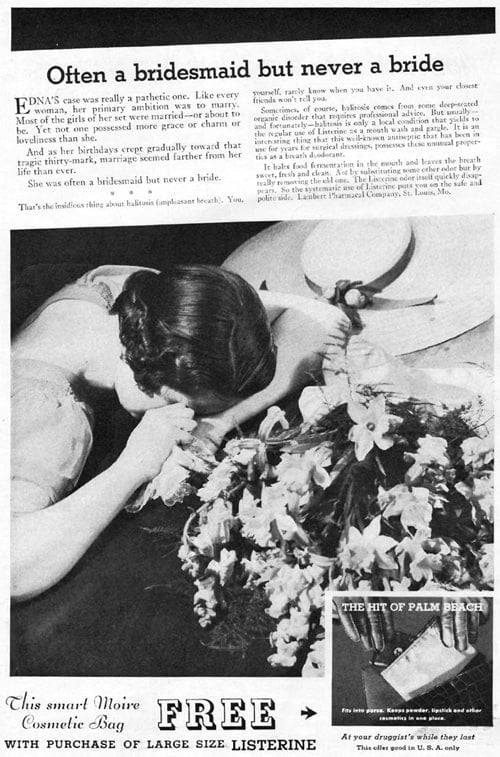 In fact, Listerine was the originator of the phrase “often a bridesmaid, never a bride” because of their ads targeted at young women wanting to get married. Here’s a TV ad from the 1950s. 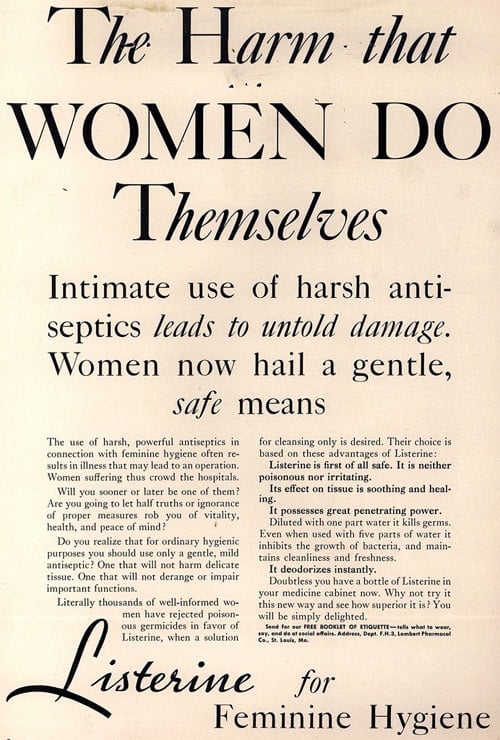 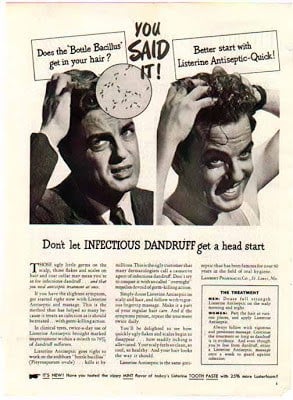 Through the years, they’ve even claimed to prevent sexually transmitted diseases. I’ll just let you use your imagination on what women were supposed to do with Listerine to prevent that little problem.

And to cure dandruff—-> 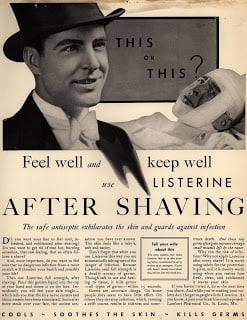 And to use after shaving — or else you could wind up in the hospital with your head covered in bandages. I had no idea shaving could be so deadly! 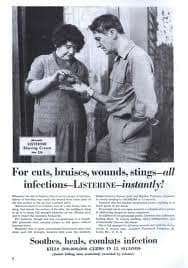 And to put on cuts and bruises … although I’m not sure how it was supposed to help bruises, which don’t normally get infected because the skin isn’t broken. But you’ll notice they gave up on all of those claims in recent decades and have been focusing on oral health.

The reality, however, is that if you’re buying mouthwash, you can save your money. Dental professionals agree that brushing and flossing are the important things. Contrary to the ads, “everyone” doesn’t have halitosis. Maybe most of us already realize that we don’t need mouthwash for bad breath, and that’s why they’re still trying to convince us that we need it for other reasons … like all the claims listed in the lawsuits.

5 thoughts on “Do you need mouthwash?”

Thrifty Homesteader is a participant in the Amazon Services LLC Associates Program, an affiliate advertising program designed to provide a means for sites to earn advertising fees by advertising and linking to amazon.com. You pay the same price when you purchase through affiliate links as you would if you went directly to Amazon, and our site earns a small commission, so by shopping through our links, you are helping to support our blog so that we can continue to provide you with free content.
8 shares
8 shares